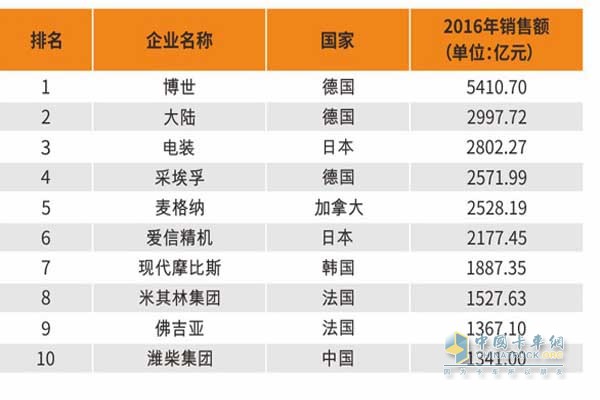 China's spare parts industry has a huge potential for growth. In 2016, China's auto sales reached 28.02 million vehicles, accounting for 33.3% of global vehicle sales. However, in terms of the number of auto parts suppliers, only five Chinese auto parts suppliers were selected in 2017 to be the global auto parts supplier TOP100, in number with Germany (16), Japan (28), and United States (22 There is still a big gap compared to home);

As for the scale of revenue, the total auto revenue of the five Chinese component suppliers was RMB 147.09 billion, accounting for 2.9% of the total revenue of TOP 100 suppliers. Chinese parts suppliers have huge room for growth both in quantity and scale.

There is a big gap between the volume of auto parts suppliers and overseas parts giants: In recent years, China's auto parts suppliers have gradually entered the fast lane with the development of the Chinese auto industry. However, the scale of China's component giants and world-class component suppliers is quite different, among which TOP100, TOP50, and TOP1 are less than 10%, 11%, and 28% of their corresponding revenues.

TOP100: Only 10% of the world's giants. In 2016, the global auto parts supplier TOP100 total revenue has exceeded 5.1 trillion yuan, accounting for approximately 41.8% of the world market scale. The total revenue of the top 100 auto parts and components industry in China has grown from 0.3 trillion yuan in 2012 to 0.4 trillion yuan in 2015, CAGR reached 14.3%; in 2016, the leading performance of independent components has entered the fast lane, and the TOP100 revenue totaled. Increased 27.5% year-on-year. However, the gap between Chinese parts suppliers and the world's giants is still huge. 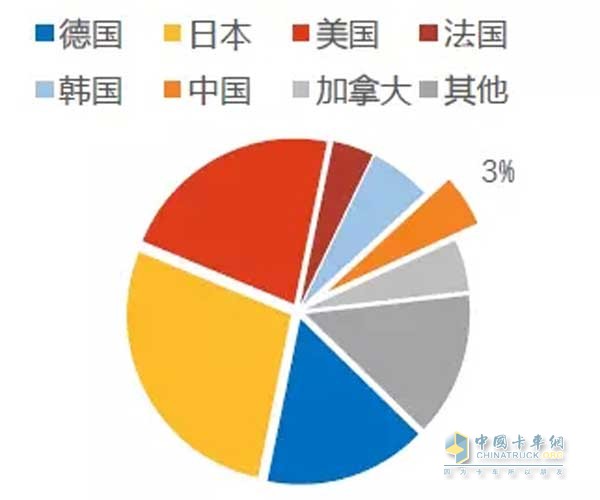 TOP1: In 2015, Yanfeng Auto Parts, a wholly owned subsidiary of Hua Yu Automobile, completed its restructuring with Johnson Controls' global interior business, and it became the worldâ€™s largest automotive interiors supplier. With the sales revenue of RMB 86.29 billion in 2016, it ranks as the top self-owned brand among the top 100 suppliers in the world, but it is only 27.9% compared with Bosch, the world's largest supplier of parts and components.

However, in terms of operating revenue, the scale of leading auto parts suppliers and world-class auto parts suppliers in each sub-segment differs greatly, and the proportion of auto parts suppliersâ€™ revenue in the transmission system and engine systems accounts for less than 2%. % Even in the fastest growing auto parts industry, the revenue of Yanfeng Auto Parts 2016 after the restructuring of the Johnson Controls business was only 77% of Andorto, and China's sub-industry leaders have greater growth opportunities.

Autonomous parts suppliers started late and were small in size. After the 1980s, China began to focus on the production of a number of independent component suppliers that were born/started in the auto parts business, including CITIC Dika (1988), Minth Group (1992), Fuyao Glass (1995), and Ningbo Huaxiang. (2001) et al. But even with rising star parts suppliers (born in the 40s and 60s of the 20th century), independent component suppliers started more than 20 years late.

As of 2016, there were 74 OEMs in the Chinese auto market, of which 66 were OEMs with sales data throughout the year; SAIC, Dongfeng, FAW, Changâ€™an and BAIC were the five largest groups, accounting for 70% of the total sales volume. The next 30% is attributable to the remaining 61 companies. The degree of industrial concentration has been somewhat improved, but it still shows a small and scattered pattern.

The rise of independent brands is irresistible and gradually erodes joint venture market share. In recent years, the sales of self-owned branded passenger vehicles continued to increase, and the market share increased from 28.4% in 2013 to 43.9% in the first half of 2017. The market share of brands in South Korea, France, the United States, and Germany declined to varying degrees. Among them, the decline in Korean brands was the most significant, with the current sales share of only 3.8%.

Pressure on joint ventures has intensified, and import substitution machines are expected to accelerate. With the rapid growth of the auto industry and the slowdown in the growth of the industry, the competition in the auto industry has become increasingly fierce. On the one hand, the period for launching new models has been significantly shortened. On the other hand, the overall sales margin of the automotive industry has also dropped from 9.0% in 2014 to 8.3 in 2016. %. The intensification of pressure on the joint-venture vehicle manufacturers increased the demand for low-cost and new product launch speeds. The advantages of self-owned parts suppliers, such as high cost-effectiveness, quick response, and good service, are even more significant, creating opportunities for in-depth penetration of the supply chain of joint-venture vehicle brands, which will accelerate import substitution.

The weightlifting barbell bar is designed for the clean & jerk and snatch Olympic weightlifting competitions. It has a smaller diameter (28mm) and has more elastic energy storage.