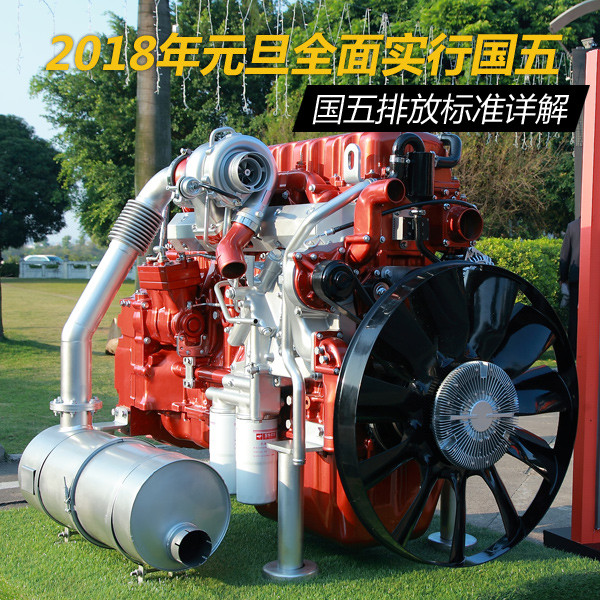 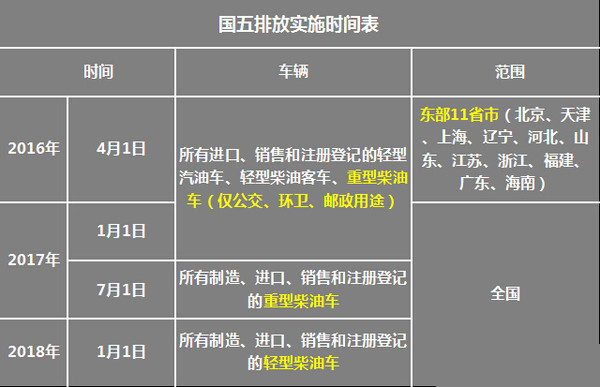 The country's Ministry of Environmental Protection announced the V emission standards will start with 11 provinces and cities in the eastern part of the country and then, starting from the bus, sanitation and postal use gradually extended to all trucks, from April 1, 2016 to January 1, 2018, Sub-regional, sub-periodic, phased implementation. Implementing in stages is the biggest difference between the country's five countries and the implementing countries. This step-by-step implementation will ensure a smooth transition of the market from country 4 to country 5.

The most important is a diesel engine exhaust pollutants particles (PM) and nitrogen oxides NOx (NOx about 90%), the particles are one of haze incentives, and the nitrogen oxide gas is toxic, cause photochemical smog. There is also a small amount of nitric oxide CO (higher discharge at high load), sulfur dioxide SOx, and nitrogen-hydrogen compound HC . These three gases are toxic gases. The other major pollutant in exhaust gas is carbon dioxide. Although carbon dioxide itself is non-toxic, it is the main component of the " greenhouse effect " . In Europe and the United States, it has begun to limit the emission of nitrogen dioxide. 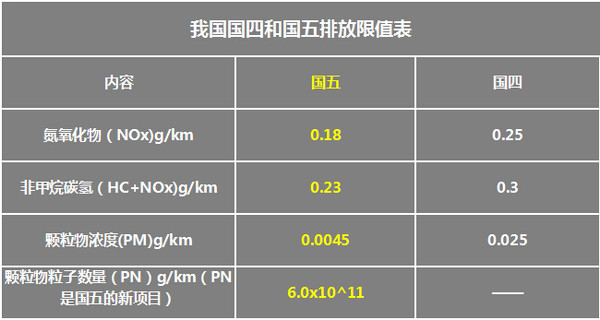 â— Ensure that the country will implement the three aspects

Whether it is China or the United States and Europe, in order to meet the increasingly stringent emission regulations, but also to reduce the fuel consumption of diesel engines, usually consider the following three aspects.

Including the reduction of sulfur content in the diesel, colloidal content, control of polycyclic aromatic hydrocarbon content, cetane number, improve the lubrication performance, the use of additives, etc., to reduce the emissions of particles.

China's national five-standard diesel has been implemented for more than half a month. The three-barrel oil stations are basically replaced because they are directly supplied by manufacturers. However, private gas stations are relatively slow to replace, and many are still selling four national standards. It is the purchase channels that are not fixed, and most of them are local refinery companies.

In the face of near-rigorous national V emission regulations, relying solely on the above technologies is not enough, exhaust emission aftertreatment technology must be comprehensively used to control emissions.

â— At this stage, the SCR system is still the mainstream 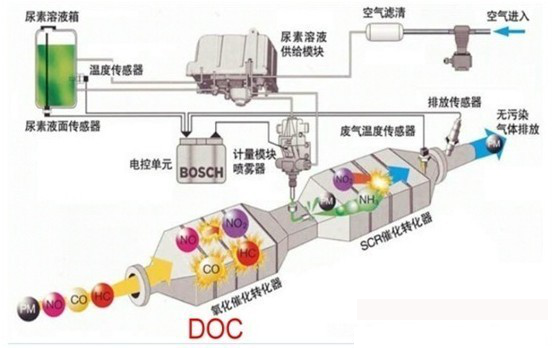 The SCR technology has gradually matured in the fourth stage of the country. To upgrade the national five emission standards, only the technical parameters need to be adjusted. There is little change in the engine, the relative development cost is lower, and the market acceptance is higher, so the SCR is still The mainstream technology that meets the national five emission standards.

The most important exhaust pollutants of diesel engines are particles ( PM ) and nitrogen oxides ( NOx ) ( NOx accounts for about 90% ). Particles are one of the causes of haze, and nitrogen oxides are toxic gases that cause photochemical smog . There is also a small amount of nitric oxide CO (higher discharge at high load), sulfur dioxide SOx, and nitrogen-hydrogen compound HC . These three gases are toxic gases. The other major pollutant in exhaust gas is carbon dioxide. Although carbon dioxide itself is non-toxic, it is the main component of the " greenhouse effect " . In Europe and the United States, it has begun to limit the emission of nitrogen dioxide. 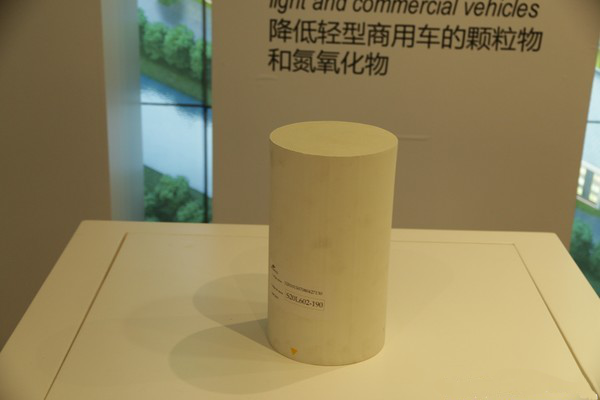 By reducing the NOx emission by EGR , there will be a certain increase in particles, and the increased particles will be reduced by DOC+DPF treatment, so as to achieve the purpose of reducing NOx and particles.

The EGR+DOC+DPF technology route needs to change the engine structure, and the DPF currently has a high single purchase price. After a long period of use , the DPF will also cause blockages and require active regeneration for regular cleaning. Therefore, it is not suitable for large-scale promotion at this stage. 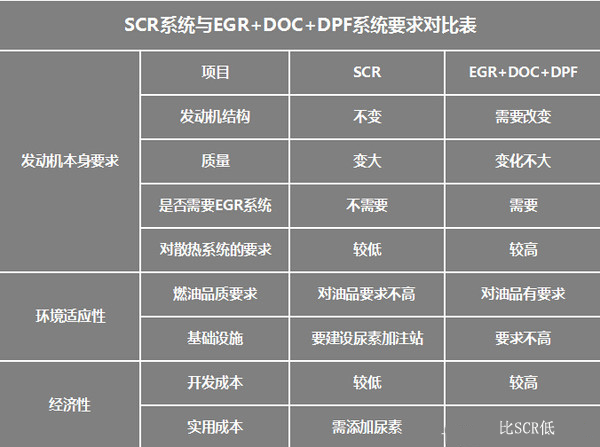 Through comparison, it can be found that SCR fuel economy is good, engine changes are small, and low heat has no requirement for cooling system. However, the size and weight of the SCR system cabinet are large, the monitoring system is complicated, and urea needs to be increased. A long time will result in crystallization. The cost is increased, especially for light trucks.

EGR+DOC+DPF has the advantages of high particle conversion rate, light weight, and small size. However, it has high requirements for oil products, lower combustion economy than SCR , and high heat has requirements for cooling systems.

China's emission standards are mainly based on European standards. Although there are slight differences in details, they are generally the same. For example, the country five is equivalent to the Euro five standard. At present, China has already reached the fourth national and national level, but it is still one level behind Europe and the United States. Now that environmental issues are global issues, and China is a big country of vehicles, the issue of emissions has received international attention. Therefore, the acceleration of emission escalation is a general trend.

At present, China is developing a six-phase standard that is expected to be completed by the end of 2016 . According to the current environmental protection requirements, the National Sixth Standards will further tighten the emission limits of nitrogen oxides and particulate matter. The overall goal is to tighten the National Five Standards by 30% . 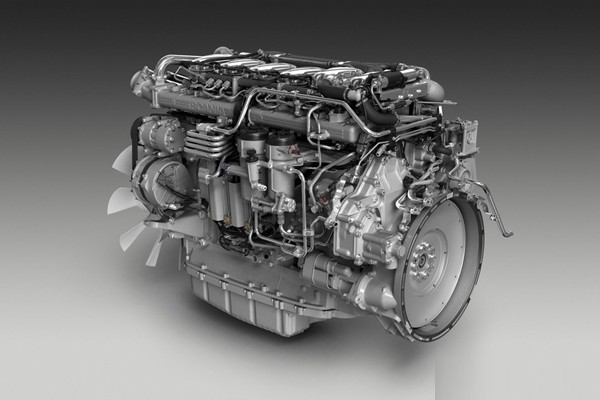 From the European standard engine, the technical route adopted is SCR+EGR+DOC+DPF . It is mainly to install EGR on the engine body and add a throttle valve at the intake to precisely control the intake air. Post-processing technology still uses the traditional SCR front-end with DPF particle traps to meet the needs of purifying exhaust gas and meeting emission standards. company website: Â  Contact number : 139-8644-8222 Â Â Â Â  Manager Guo